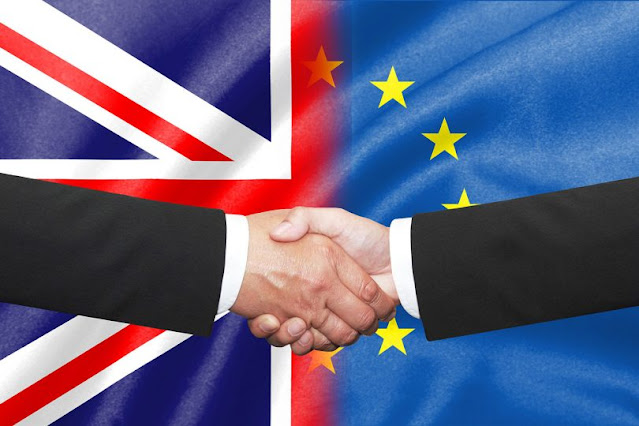 On 23 June 2016, despite the betting odds being largely in favour of “Stay”, the UK decided to leave the European Union. Four and half years later, we finally know what this means – or at least have a guiding framework as several items still need to be worked out. For those of you who need a reminder of the complex chain of events triggered by the results of the referendum, I've included a full time line up until the trade deal was agreed on 24 December, 2020 below.

In the meantime, let’s go back to May 2016. Ahead of the  referendum result, Accel published a post discussing the potential implications of Brexit for start-ups. Then, the expert views on the outcome for the UK were fairly negative. In one of the most comprehensive polls of experts (FT poll of more than 100 economists in Jan 2016), more than75% thought Brexit would adversely affect the UK’s medium-term economic prospects; only 8% thought Britain’s economy would benefit.

Back to today: were these predictions accurate? Did the deal reached on 24 December  negatively impact the tech ecosystem? In 2016, we highlighted five key areas which could have a major impact on start-ups: freedom of movement for EU and UK citizens, Fintech regulation, EU R&D funding, data privacy and currency impact. Let’s have a look at where we landed.

Unfortunately, for the future, the changes are more significant with no right to live or work in the EU and vice versa. However, both parties have put in place specific rules to facilitate short term business trips and temporary secondments of highly skilled employees. UK nationals will need a visa if they want to stay in the EU for more than 90 days within a 180 day period and similarly EU citizens traveling to the UK will need a visa. How difficult it will be to obtain these visas is unclear, but the UK has Start-up, Innovator, Global Talent and Investor visas, which are all relevant for the tech ecosystem and will hopefully be prioritised. So, if your start-up requires frequent back-and-forth trips to the EU or vice versa, it’s a good idea to start keeping track of the number of days. Also note that ID cards won’t be a valid form of identification when travelling between the UK and EU anymore; you’ll need a passport. The other thing to pay attention to is mobile roaming. Nothing has been agreed yet, so your phone bill may increase significantly. Check with your operator.

So, net-net, start-ups will have to carefully check the rules before sending someone to work in the EU (or the UK), particularly as there may be some differences in rules depending on the member state visited. It will very likely mean more admin and paperwork, which isn’t ideal for the ecosystem as we’re now seeing more and more start-ups expanding across Europe. In the current environment, physical location has become less important, but the balance office/home will likely be different post pandemic and the need for a founder to travel frequently to a newly open country will unlikely go away.

Unfortunately, the trade deal doesn’t cover financial services and both sides have agreed to discuss this topic separately. This means that on 1 January 2021, the passporting rules no longer apply and UK financial services firms won’t be able to serve EU customers and vice versa. The only exception is for UK clearinghouses, which have been granted temporary equivalence.

While discussions are ongoing, how long it will take for the UK and the EU to reach an agreement is anyone’s guess at this point. This is obviously a big blow to London’s fintech ecosystem.

The UK is the second largest recipient of EU research and innovation funding (around £1B per year – roughly 20% of the total science budget allocated by the UK government). Most of this funding has gone to university R&D programs, but at least 15% typically goes to start-ups/SMEs. This funding will no longer be available after Brexit, even though UK researchers will be allowed to participate in EU research programmes. The question is whether the UK will expand its start-up grant program to compensate for this loss.

The core issue around data privacy was the potential restriction on the transfer of  personal data between the EU and the UK. This is obviously key for the digital ecosystem with vast implications on how business operates and the need for new data centres and compliance processes.

Unfortunately, the trade deal leaves us with the same question mark as the agreement doesn’t cover the flow of personal data between the UK and the EU. However, this issue will be addressed separately in “early 2021” as the EU is considering giving the UK its Data Adequacy status. This status would mean that the EU recognises the UK data protection regime as equivalent to the EU and allows for the free flow of personal data. It seems like this is the intent on both sides, so fingers crossed.. In the meantime, we have to assume that this is not the case.

For non-personal data, both the UK and the EU are committed to ensuring cross-border data flows to facilitate trade in the digital economy so they won't impose localisation requirements for data storage and processing. This is good news for cloud businesses as long as the data isn't personal.

We predicted in 2016 that the GBP would continue to suffer as a result of Brexit and the data confirms it. The two major currencies relevant for the tech ecosystem are USD and EURO. Let’s look at where we are today. 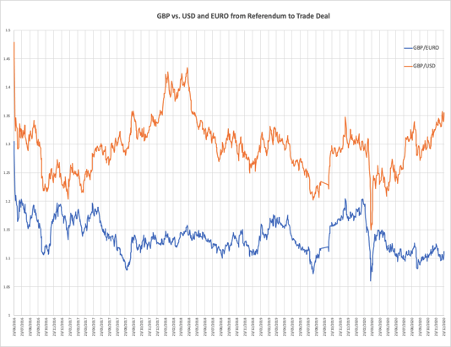 On 23 June 2016, the day of the referendum, which was expected to be in favour of “stay”, the GBP was trading at 1.30 EURO. After the trade deal was announced, the rate was 1.11, representing a 17% drop. This is good news if your start-up is planning to expand in the UK with most of the revenue denominated in EURO. However, the news isn’t so good if you’re a UK start-up expanding to the continent, at least until your EURO denominated revenue can cover your cost base

On the referendum day, the GBP was trading at 1.48 USD. After the trade deal was announced, the rate was 1.36, representing a 9% drop. While the GBP has weakened against the USD, its decline has not been not as sharp as against the EURO. So, not great if you’re planning to expand to the US but not as bad as the EU.

In summary, I’d say that beyond the need to apply for a visa for a business trip of more than six months, the loss of EUR R&D grants and a weaker GBP, the two biggest areas set to impact the tech ecosystem are still hanging in the balance. Firstly, fintech’s inability to benefit from the EU financial services passport will add important operational and compliance costs. Secondly, the management of personal data for start-ups operating in both the UK and EU is unclear. This is particularly relevant for SaaS businesses operating in the UK with EU servers or vice versa. Hopefully, more clarity will be provided in these two areas over the coming weeks or months so that start-ups have a better view of the playing field.

So where did we land? Better than a no deal scenario of course, but it looks like in all five key areas we highlighted, the UK and European tech ecosystems are left worse off - as expected.

Timeline up to the trade deal agreement

Here is a reminder of the complex chain reaction of events triggered by the results of the referendum, which concluded on 24 December 2020 with the trade deal:

-   29 March, 2019: UK serves the withdrawal notice under Article 50 of the EU treaty, triggering the start of the negotiation on the terms of its exit from the EU, with a two-year limit

-   29 March, 2019: UK parliament rejects the Brexit Withdrawal Agreement for a third time. Negotiation of a two-week delay to give parliament more time, moving the date from 29 March to 12 April, 2019

-   24 July, 2019: Theresa May resigns as prime minister. Boris Johnson is appointed leader of the conservative party and becomes prime minister, calling for a snap election on Dec 12th to gain majority in parliament

-   17 October, 2019: a revised Withdrawal Agreement Deal is announced. The withdrawal agreement provides for a transition period until 31 December, 2020

Posted by Philippe Botteri at 2:33 AM