A Quick & Funny Summary of AdTech

I love this video: everything you need to know about online advertising! 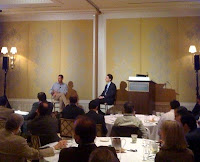 For the third year in a row, Bessemer hosted its Cloud CEO Conference, assembling roughly 100 CEOs/CxOs of our cloud and rich internet applications portfolio companies (Yelp, LinkedIn, Playdom, Zoosk, Smule, Wix, Eloqua, Teamviewer, Cornerstone OnDemand, Intacct, Criteo, Bizo and many others) as well as a few leading public cloud executives (Josh James from Omniture, Jeff Jordan from OpenTable, Adam Selipsky from Amazon Web Services, Grieg Coppe, CSO of Intuit, Michael Simon from LogMeIn...). The event was very well received by the group with our survey showing a rating of 4.4 out of 5! The full agenda of the event can be seen at the following link 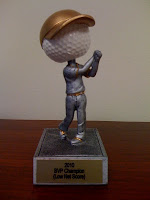 The event started with an optional golf round on May 11th afternoon at the Palo Alto Golf and Country Club with a wonderful weather to welcome the participants. The golf was followed by cocktail, dinner and poker: a very fun start to prepare the full day of content and networking on May 12th at the Rosewood SandHill.
Unveiling of the "10 Things Every CEO Needs to Know About Product Design"
The best rated session of the day was the presentation by Jason Putorti on product design. Jason is the design Czar who designed the Mint user experience and we are incredibly lucky to have him as our first Designer In Residence!
Jason's presentation was focused on the "10 Things Every CEO Needs to Know About Product Design and User Experience". The full presentation is available at the bottom of the post but here are the key highlights:
10 Things CEOs Need to Know About Design
View more presentations from Jason Putorti.
A few highlights from the different keynotes and speakers
On top of Jason, we also had the chance of having many great speakers at the event and here are a few quotes and notes that I have taken during the different keynotes and panels:
Looking forward to the fourth edition next year!
Posted by Philippe Botteri at 5:39 PM 5 comments:

As we are entering a new year, I thought it would be interesting to publish every quarter an update on the state of the 13 public SaaS/Cloud companies in the Index. So, here is the first edition, including the recent Q4 2009 earnings and the updated 2010 forecast.
1) Slightly improved sentiment for 2010, but companies are still planning for a long recovery
The following chart compares the median growth rate for the SaaS 13 group both in November 2009 after the Q3 reporting season and in March 2010 after the Q4 reporting season. Given the predictability of SaaS GAAP revenues on a quarterly basis, the fact that the 08/09 projections were unchanged is not a surprise. However, despite healthy Q4 results (most companies were at or above plans) few have increased their 2010 guidance and the median moved only from 15% (same as 2009) to 17%. If we consider that 2009 was probably the worst year in the past 5 years, forecasting the same growth for 2010 is not very encouraging. You could argue that it takes some time to restart the SaaS flywheel after a slow year, but an acceleration in 2010 should at least translate into a stronger 2011 guidance, which is not really the case (10/11 growth median is 18%, so barely above 2010). The SaaS growth recovery does not seem to take a "V" shape 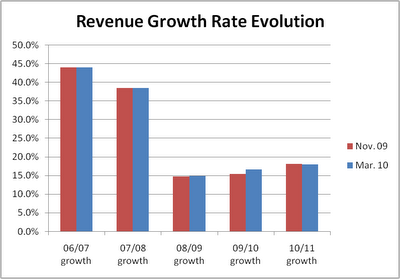 2) Sales productivity is ramping up: bottom was hit in the first half of 2009
However, the sales and productivity of the group, measured by the median "Customer Acquisition Cost ratio" or "CAC ratio", seems to be recovering more steeply. Given the lag in GAAP revenue recognition, the Q4 09 revenues are indicating an increased productivity in Q3 2009 (we have unfortunately to look backward due to the GAAP revenue recognition model), but the trend is very encouraging. Given that the revenues are not growing very fast, this means that most of the companies have reduced their sales force and focused on productivity improvement. Also, even if the productivity is increasing, it is still far from the 0.75-1.0 range where you would expect companies to start pumping more investment in sales and marketing to drive growth 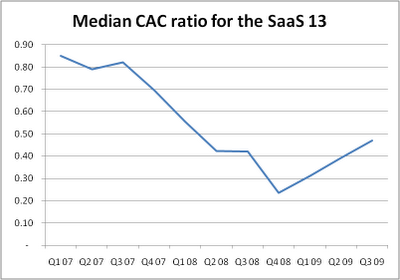 3) Focus on profitability
It is interesting to see that the improving sales and marketing productivity is not pushing companies to be more optimistic on their top line but on their bottom line. While the group sentiment for 2010 did not improve significantly vs. November 2009, the projections for 2011 are now a lot more optimistic - 42% higher 2011 aggregated EBITDA announced in March 2010 vs. the November 09! This is a significant guidance revision, which shows the current focus and mindset of the management of these companies. A sign that the SaaS industry is already maturing or a reflection of the public investors expectations? 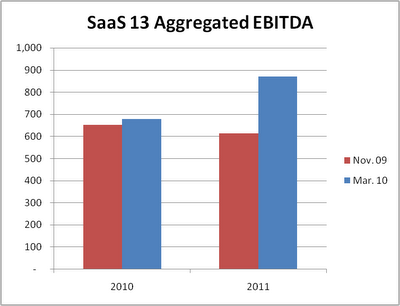 4) Cash balance increase indicates a focus on M&A to drive further growth
The past few months have also been marked by a few high profile equity and debt announcements - most notably SuccessFactors, Taleo and Saleforce.com. In total, the cumulative cash balance of the group increased by 64%, or more than $1B! As this cash will not be used to fund organic growth initiatives, we can expect several acquisitions in the coming 24 months. To date, Salesforce has been focused on small tuck-in technology acquisitions, so it is an interesting move for them. There aren't any companies at scale built on Force.com that would justify such a raise, so either Salesforce will have to buy a light technology at scale (email marketing?) that can easily be ported to Force or they will have to breach their platform credo. 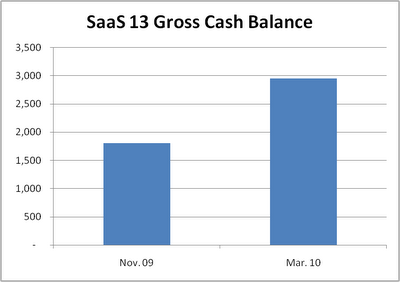 All in all, an interesting start for the year!
Posted by Philippe Botteri at 7:35 PM 4 comments:

Email ThisBlogThis!Share to TwitterShare to FacebookShare to Pinterest
Labels: SaaS, sales and marketing

A funny perspective on Google innovation...

Email ThisBlogThis!Share to TwitterShare to FacebookShare to Pinterest
Labels: anecdotes

A bit of French humor... so much for Cleantech! 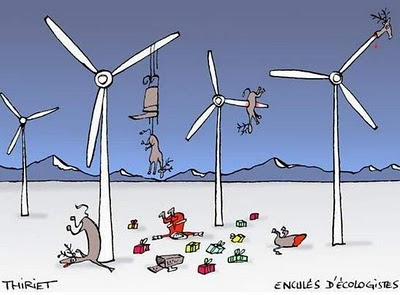