2019 Accel Euroscape – The Rise of Europe

The top 100 SaaS companies in Europe and Israel 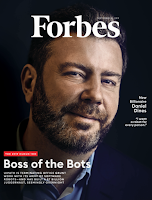 The European Software-as-a-Service world changed forever when Daniel Dines, the founder of UiPath, made the cover of Forbes as ‘Boss of the Bots’ last month. Who would have thought five years ago that a Romanian SaaS company would be valued at $7 billion and reach that valuation in record time?


First, let’s zoom out and look at how SaaS companies have performed globally. Ten years ago, in October 2009, Salesforce was a dominant force among the 21 public SaaS companies, with a valuation that represented one third of their combined $22 billion market capitalisation. Since then, its market cap has grown 18x, reaching $130 billion, which is the fourth biggest for an enterprise software company right behind companies that are 20 years older, Microsoft, Oracle and Adobe.


Today, the landscape is very different. There are 66 public SaaS companies, representing a formidable $796 billion combined market cap, which is 36x bigger than the combined 2009 market cap! The new generation of public SaaS companies is also growing faster, reaching a $100 million revenue run rate in five to seven years today versus 10 to 15 years a decade ago.


The rise of Europe
Against this healthy backdrop, let’s drill down into Europe. Venture investment in the region’s SaaS companies is growing quickly. From 2016 to 2019, it rose from $2 billion to $5 billion, growing much faster than in the US, which grew from $15 billion to $20 billion. It now represents one quarter of the US. European companies have been able to raise rounds as large as their US counterparts, and UiPath and Veeam top the list with $568 million and $500 million in total investment respectively.


This is mirrored by our own investment. Accel has invested 3.6x more capital into new European SaaS companies in the past five years than we did from 2010 to 2014, and our 28 newest investments have raised 5.3x more capital than those from the previous five years.


European SaaS companies’ growth is following suit, and they’re now growing at a similar pace to their US counterparts. Our analysis shows that when comparing the time to grow from $1 million to $10 million Annual Recurring Revenue (ARR) and then from a $10 million to $50 million ARR, they are neck and neck.


Finally, while it is still early days in the public markets, as European SaaS matures, the path ahead looks promising. There are now seven European-founded public SaaS companies, with three of them above $5 billion market cap (Zendesk, Elastic and Wix) and 16 unicorns.


2019 Accel Euroscape: list of top 100 SaaS companies from Europe and Israel
Before diving into the list of top 100 SaaS companies, we looked back at our 2016 and 2017 editions to assess the companies’ track records. From a financing standpoint, 29 companies from the list have raised more than $100 million, and the list has raised a total of $9.6 billion collectively. There has been $4 billion of realised exits through 17 mergers and acquisitions, with Datorama (Salesforce, $850 million according to Reuters) and Demisto (Palo Alto Networks, $560 million according to TechCrunch) as the top two. In addition, the list generated 11 new unicorns (UiPath, Monday, DarkTrace, Intercom, Doctolib, JFrog, Celonis, Collibra, Sisense, TalkDesk and WalkMe).


To design the 2019 list, we have surveyed more than 1,500 companies across the region. We have also limited the list to companies between $1 million and $50 million plus ARR. Companies above that revenue threshold and with high growth rate have made our ‘Champions League’ (see full presentation). These 13 companies have $19.5 billion plus in value, and we would not be surprised to see their IPO filings in the next couple of years. 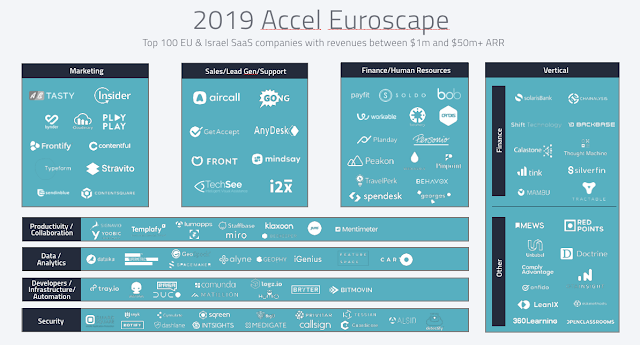 Note: to create the list, we ranked each company by a set of criteria including market attractiveness, level of technology differentiation, strength of the team and initial traction (monthly recurring revenues and growth in number of employees). To improve the ranking, we have also worked with G2 to incorporate customer feedback. Nothing is perfect, and we might have missed some great companies. Your feedback is welcome!


The evolution of the list clearly shows the momentum we continue to see in the market, with key trends including:


·       There are strong players emerging from a diverse set of industries, from security to HR and marketing.


·       Geographically, while the UK and France remain strong with 24 and 21 companies respectively, Germany has been the fastest grower, going from eight to 17 companies.


What’s next?
These are strong upward trends for the European SaaS industry, but of course the big question is what does it all mean? When looking at the list, we see five trends that are likely to emerge.


1.     The rise of the bots: “I want a robot for every person,” Dines told Forbes during his interview. While Robotic Process Automation and process mining are leading the adoption curve, delivering unprecedented ROI to the enterprise, the rate of AI adoption is still very much on the cusp of explosion. With more than 50% of companies across sectors at the evaluation stage and less than one third considering AI as a mature practice, we think we are about to see a fast pace of adoption. And yes, we agree with Daniel that there will be a lot more bots in the enterprise in the near future, as AI comes of age.


2.     Ubiquitous APIs: with Amazon Web Services reaching a $34 billion revenue run rate, Stripe and Twilio valued close to or above $20 billion and the next generation of companies emerging, APIs are now foundational to the development of cloud computing and their adoption will only accelerate. We will see a new generation of API companies emerging from Europe, with companies like MessageBird and Algolia already showing great promise.


3.     Security shifting left: writing code is good, but writing secure code is much better, and it costs six times less. While there are so many industry-focused predictions we could make, we are only going to highlight one in security, an ever increasingly important industry: correcting security flaws early in the development cycle vs. the operating and monitoring stages will become mainstream. Currently emerging, with companies such as Snyk and ShiftLeft, we see this trend as a key tenet for the next generation of leading security companies.


4.     Market correction: while the momentum is strong, valuation multiples are way above their median level and more and more funding is going into the company lifecycle early. There will be a market correction, and while we don’t know if there will be a hard or soft landing, our advice to companies is to take advantage of the environment and raise capital now, while making sure that they have solid control of their cash burn.


And, one bonus prediction: each company mentioned in the 2019 Accel Euroscape will receive 100 plus calls and emails from VCs!