With companies like Saleforce and SuccessFactors trading north of 8 times 2011 revenues, SaaS valuations are just back to the 2007 peak, but what is remarkable however, is that, after a period of strong correlation in 2008/2009, SaaS companies (represented by the SaaS 13 Index) have massively outperformed the overall technology sector (Nasdaq) in the past 12 months, creating a gap of more than 60%! 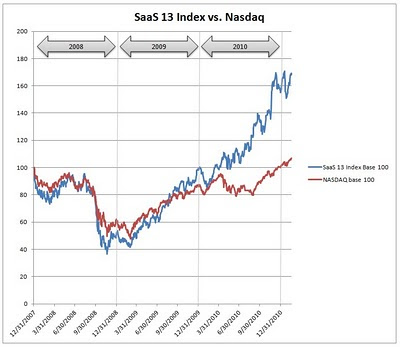 What happened? It would have been easy to explain the difference by changes in the 2010/2011 revenue growth projections but unfortunately that is not the case. SaaS companies projected to grow 18% over this period in January 2010 and this projection moved up only to 20% today. In comparison, the overall technology sector growth was projected at 9-10% in early 2010 and this forecast did not change significantly today.

So if the difference cannot be explained by short term projections, we need to look over an extended period. To justify a 60pts difference, we have to believe that the current growth rates of 10% for technology and 20% for SaaS will continue to hold for the next 9 years before converging. So the question becomes: "Can SaaS outperform technology growth by 2x over the next decade?" Not unreasonable.

To drill down further and better understand how public markets value SaaS companies, I split the SaaS 13 Index into two groups: companies above $1B in market cap (large cap) and below $1B (small cap) and compared the performance of both indices to the Nasdaq: 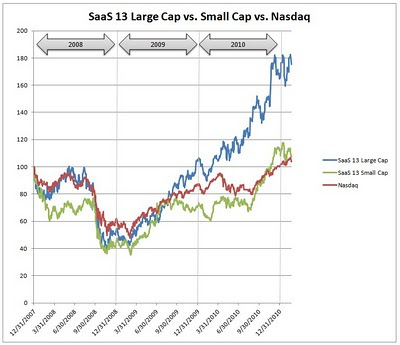 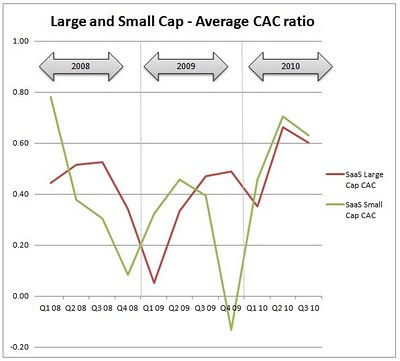 Why is scale so much rewarded by public markets? Scale is usually correlated with market leadership and large market size, and Wall Street is rewarding with a premium multiple these large SaaS companies because (1) their growth is supported by a secular trend (now it is clear that Cloud Computing is here to stay!) and (2) their leadership position in multi-billion dollar markets will likely make them dominant players in the software landscape, even though they are still small today (SuccessFactors $2.5B market cap or even Salesforce at $17.5B seem tiny compared to the $223B of Microsoft). Unreasonable? Time will tell!
Posted by Philippe Botteri at 8:15 PM