While poised with a limited number of transactions this year, the world of public Cloud Computing and SaaS companies has been marked by two events in the past few months: the acquisition of Omniture by Adobe and the high profile IPO of LogMeIn, a leading provider of PC remote access and support with a very interesting freemium model.

The acquisition of Omniture by Adobe for $1.8B was a great outcome for the company (kudos to Josh James, their visionary founder & CEO!) and the second SaaS public transaction in history behind the acquisition of Webex by Cisco in 2007 for $3.2B. After Google buying Postini, the SaaS M&A market continues to be full of surprises. Who would have thought that Adobe would acquire Omniture? It is intriguing to see the M&A dynamics in the space, highlighting the interest of tech companies for recurring revenue streams - even SAP announced in their analyst call earlier this month that they were moving from perpertual licenses to five year term licences. Hopefully this trend will continue (and accelerate!) in 2010.

On the IPO front, LogMeIn made the news, being one of the few tech IPO on the NASDAAQ in 2009. The stock was very well received, jumping 25% on its first day of trading. Today, the stock is still up 22% and the company is trading at a very healthy 4.2 EV/09 rev. multiple, with 43% 08/09 growth rate and double digit free cash flow margin. Congrats to Jim Kelliher, CFO and Michael Simon, CEO, for a successful IPO!

These events led me to redesign the SaaS 13 Index. I have changed the composition of the Index with LogMeIn officially replacing Omniture and Dealer Trak and AthenaHealth replacing Salary.com and LivePerson. The Index has also been reset to start at 100.00 on January 1st 2008. All the multiples and CAC ratio have been adjusted to reflect this update.
As you can see on the graph below, the Index made a nice come back this year and we are just at 11% down since Jan. 2008 after flirting with the lows in March 09 at -65%. 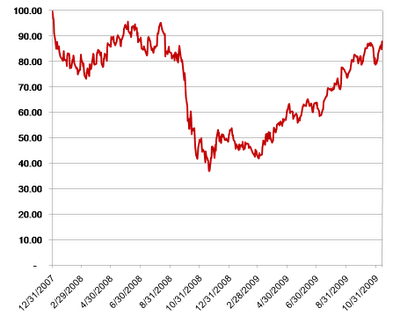 Posted by Philippe Botteri at 8:25 PM