Death Sentence for SaaS...or for Lawson? 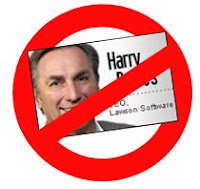 In a very entertaining interview published by Zdnet Asia last week, the CEO of Lawson, the ERP software company, forecasts the collapse of the SaaS market in two years - at the same time the recently published report from Deutsche Bank on SaaS ("SaaS and Cloud Computing" by Tom Ernst, June 2008) claims that on premise software sales have reached their peak. Flashing statements on one side, bottom-up financial analysis on the other: I will let you decide which one to believe, but I could not help reflecting on some of the comments made in the interview:

"The hype is based on one company in the software industry having modest success. Salesforce.com just has average to below-average profitability"

Everyone would agree that the value of an operating asset is defined by the sum of its discounted future cash flows. So where does Salesforce's profitability stands today compared to the most successful on premise public software companies? The Deutsche Bank report has a very interesting chart on the topic presenting the Free Cash Flow margins vs. the revenue growth four years post IPO for select software leaders: 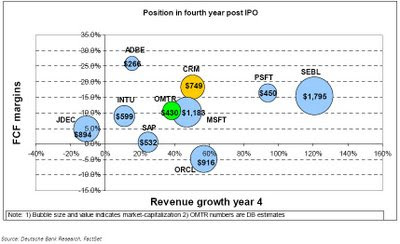 As you can see, with 20% Free Cash Flow margin and a 50% growth rate, Salesforce is well positioned in the pack! Now let's look at Lawson: their FCF margin for the past 12 months was 5.8% and their 07/08 growth rate was around 13%. In dollars, Lawson, generated $50m of cash in the last 12 months and in the same period, Salesforce generated $191m. Which one is creating the most value for its shareholder? Well...that's probably why Salesforce market cap is 4.9x time Lawson's. If Salesforce is a "modest success", what how would you define Lawson's performance?

I am not sure this one deserves any comment. Is that how Lawson thinks about its customers (I assume some of them are using some sort of SaaS application)? Of course not - the CEO has a much better way to qualify their customers as you will see below...

"...traditional software is like cocaine--you're hooked. It's too difficult and expensive to switch providers once you've invested in one. If it were easier to jump ship, a lot of people would've hit the eject button on SAP a long time ago"

"[Oracle's CEO] Larry Ellison has the same perspective as I do. He accidentally funded the CRM product and Netsuite. He didn't really mean to. They've had small successes, but overall, they've been spectacularly unsuccessful"

Ouch! Poor Larry. Did he really "accidentally" made several hundred million dollars by investing in a company (NetSuite) that raised $120m and turned it into a $1B market cap… What an unsuccessful outcome! He should have invested in Lawson obviously… I could not track back their stock price in 1998 when NetSuite was launched, but since Jan. 2002, the stock price went from $17.5 per share to $8.0 today. I find it hard to believe that Larry Ellison accidentally invested in Netsuite but I am confident he DID NOT invest in Lawson on purpose...

"because all your costs are up front, and your revenue is over a five year period, the more you sell, the more you lose. You don't break-even till the four-and-a-half year mark, but here's a bigger problem--there's no guarantee that that customer is still going to be yours in four years' time"

It is true that the SaaS business model is fundamentally different from the on-premise model and SaaS companies need to look at different metrics to pilot their business (see my blog posts on MRR and CAC ratio). But does it mean these companies are not profitable? If that were the case, most of the Cable and Wireless companies who have been using a similar business model would have gone bankrupt a long time ago and Saleforce would not have 20% FCF margins today. It is true that understanding this new business model is hard for a traditional software incumbent, as this interview demonstrates...

You can find the original article on Zdnet by clicking here.
Posted by Philippe Botteri at 6:50 PM