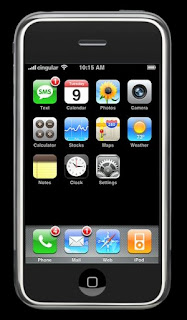 iPhone wonder
I was one of the lucky few to have a first sight at Apple's next wonder: the iPhone. The long awaited product was at last presented to the public and it was worth waiting. It is the most innovative product I have seen for a long time. Apple came up with the first multi-contact touch screen and an amazing user interface that will completely change the way people interact with an electronic device. It is the 2.0 version of the iPOD click-wheel.
But let's start with the beginning: what can you do with an iPhone? Well, it is basically the mix of a video iPOD, a smart phone, a camera and an internet browser. So, you can listen to music, watch videos, take pictures, look at pictures and slide shows, make calls, browse e-mails and calendar, send pictures, access Google map and weather information, and browse the web. The connectivity is both wireless (Cingular EDGE network) and wifi. The iPhone will be available in two versions, a 6GB at $500 and an 8GB at $600. Pricey, but as Steve Jobs explained, it is the addition of an iPod nano ($200) and a blackberry ($300)...
Aside from the sleek design, the iPhone has an amazing user interface. The multi-touch screen enables the user to perform several operations at the same time and everything is very intuitive. A few examples:
So it is a fantastic product, for sure, but there are still a few unanswered questions:
1) Will the iPhone support a VOIP client like Skype. That would make a lot of sense with the wifi connectivity, but Apple executives at Mac World remained silent on the topic
2) What is the battery life? With the current video iPOD, I can watch 3-4 hours of video, so if you are on a transatlantic flight and you enjoyed a couple of movies in the plane, it will be challenging to check your e-mails or make a call when you land...
3) The iPhone is a high-end Nokia killer, but is it a Blackberry killer? Apparently not if you trust the stock market. As Apple skyrocketed and Nokia plunged, RIM remained steady. And it is true that the current version of the iPhone is a fantastic consumer product, but the key business feature (push e-mail and calendar) are not there yet: the iPhone will support yahoo push e-mails, but not Outlook (only cache and carry). So, for now and I believe for a few more years, RIM will remain the leader. Here are a few reasons:
- I don't see businesses buying massively $500-$600 entertainment device for their employees ($300 for a Blackberry is already expensive)
- As mobile devices become pervasive, IT departments will try to minimize the number of devices to support and are unlikely to add a new mobile OS with a marginal number of users
- Push e-mail capabilities require a server product (e.g., blackberry, goodlink or exchange) and neither RIM, nor Microsoft nor Motorola has any interest in pushing the Apple mobile platform.
So it seems the iPhone is on its way to be the best high-end consumer product, but business users will still have to carry around their blackberry for some time
4) The size of the memory is limited. The size of a typical movie downloaded on iTunes is 1.2GB, that means the 6GB iPhone can carry only 5 movies...pretty limited. 6-8GB makes sense for music and photos, not video. How long will it take before Apple increases the memory?

So bottom line, it is an amazing product. It will not replace my Blackberry or my 60GB iPOD video, but I can carry a third device - not because I need it - just because it is cool!

My first question was why AppleTV, not iTV? Well, iTV is the biggest commercial television network in the UK and "eyeTV" is also an application from Elgato (it is a TV/DVR product for Mac) - so the name was already crowded. But by simply replacing Apple by a logo, the achronym was safe...
But let's get back to the product. I was really enthusiat about the iPhone story, but much less by the AppleTV.
The AppleTV is a small box with a 40GB hard drive that is plugged to your TV via and HDMI connection (high definition) and connect wirelessly to any iTunes library in your home. So, you just have to select the songs/photos/movies you want to stream to your box on your iTunes application and you can then see them on your TV. You can also stream in real time the same content directly from your computer to your TV (except the pictures). And of course, the design of the interface is super sleek. It is Apple first beach-head into the living room and a smart strategic move to get there without a gaming console. To be fair, the product is nice way to access all your iTunes content on your TV, but I was not completely convinced - for several reasons:
First, the storage space is relatively small for a device supposed to carry videos. My iTunes library is more than 70GB (and I have only 30 movies). Well you don't need space if you stream. That's fair, but to start watching the movie, you will have to wait 10mn to complete the buffer (similar to a movie download service such as movielink) - not a very pleasant experience. When I asked the question to the Apple representatives, the answer I got three times was "we can say, it depends on the wireless connection" - great answer...
Second, who wants to by an HD TV to watch low resolution movies and videos? Apple is trying to simplify the media experience by providing a single format for an iPOD screen and a large screen High Def TV. It just does not work. The quality of a 1.2 GB movie on the iPOD video is fantastic, but on a large screen, it sucks. And the sound is only stereo, not 5.1 or 7.1. No surprise: a DVD is 5-7GB, so 5-6 times the size of a movie downloaded on iTunes. At Mac World, the Apple staff presenting the AppleTV kept saying movies were DVD quality, but I don't know who would believe it...
Finally, Apple TV supports only iTunes content - fairly restrictive compared to the other media center solutions.

To conclude, I would say that for $300, the AppleTV is an expensive gadget to port your iTunes library into the living room. To make it successful, Apple will need to upgrade the quality of its content and start differentiating mobile and home video content. You can listen to compressed audio without noticing it a lot, but video is a different game, especially with surging sales of high def. screens and home theater systems

My favorite gadgets from the show
I found two products at Mac World that I really liked: 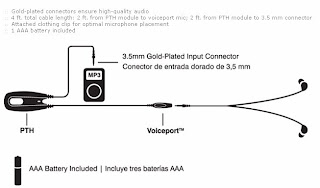 The first one is the $60 Shure PTH device (Push-To-Ear). The PTH is small device that connects to your iPOD (or any player) on one end and to your earphones on the other end. When you activate it, it reduces the sound level from your iPOD and enables a conversation without removing your earphones. Any person using noise cancelling phone will appreciate this gadget - especially in planes, where you won't have to take out your ear piece to talk to the flight attendants.
The second one is the BT 359 bluetooth GPS receiver from GlobalSat. It is a small GPS device that connects via bluetooth to any PC or mobile device (smart phone or blackberry) and cost less than $150. You will need to buy the mapping software though (around $80-100).
Posted by Philippe Botteri at 7:35 PM

Email ThisBlogThis!Share to TwitterShare to FacebookShare to Pinterest
Labels: internet